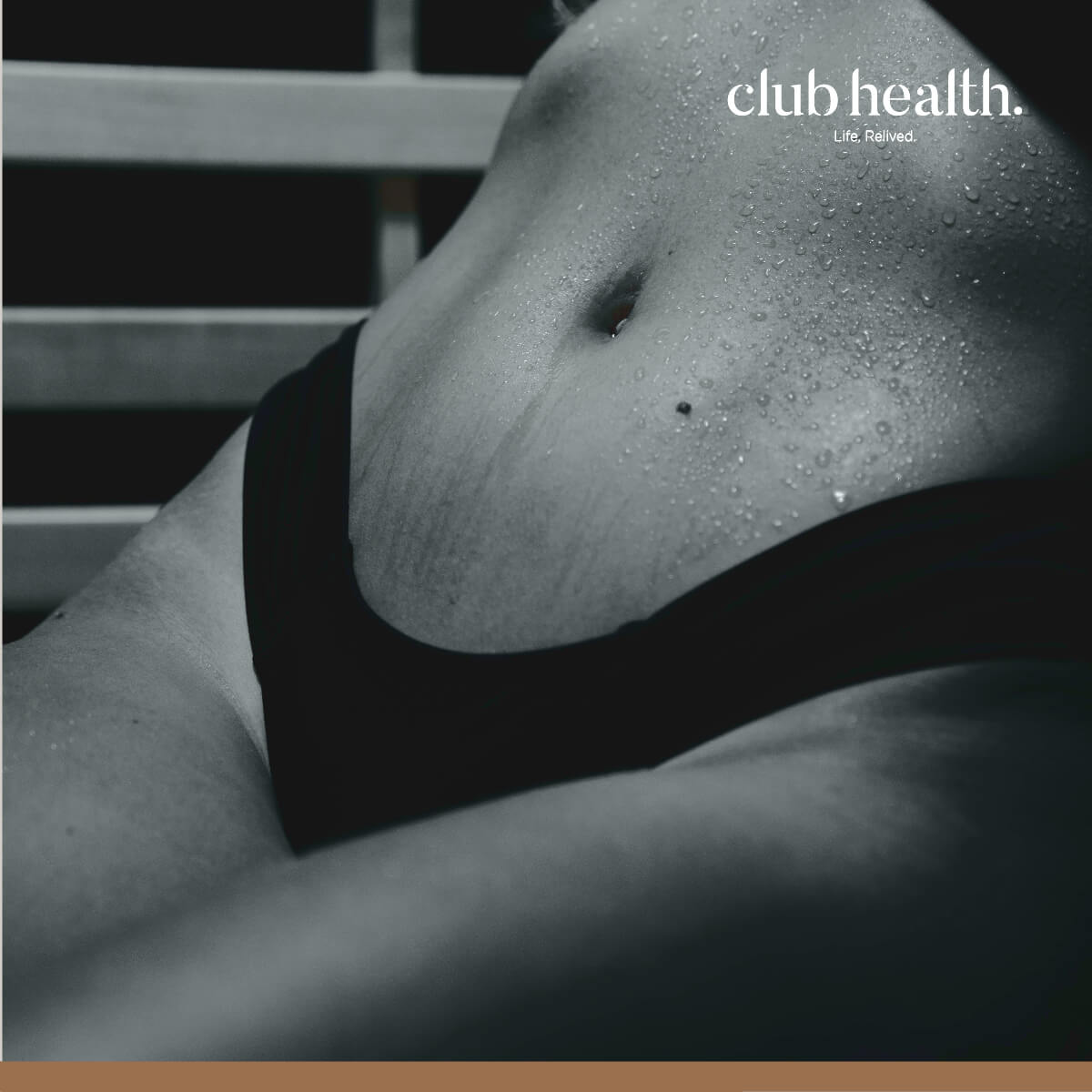 Alternative treatments are often misunderstood. The reason? We are resistant to change. We like tradition, we like what we are used to and when something new comes to the surface, we are quick to dismiss.

Physiotherapy has been a victim of these tendencies and even though there has been huge progress in the field, it has yet to be fully embraced by the public.

At Club Health, we celebrate progress and we have no problem being at the forefront of introducing it. Today, we will shed light on some amazing therapies that we will slowly introduce at the Club.

We will give you as much insights and information on these alternative treatments as possible but we would love for you to come by the Club (when COVID finally allows it 🙄) and have a chat over coffee. Our doors are always open and our staff always prepared to answer any questions you might have.

Are you ready? Let’s dive right into it.

The idea of immersing yourself in iced, cold water is not novel. This is an alternative treatment that has been around for quite some time but what’s interesting to note, is its development.

In its foundation, cold water therapy used to be utilized as a cool-down method for athletes that had just finished a high-intensity workout session. In a nutshell, this was another iteration of a cold shower, but it seemingly gave athletes an elevated sense of recovery.

The roots of this notion can be traced back to 2008 and an issue of the International Journal of Sports Medicine where researchers found that cold water immersion helped with recovery.

This theory has since then been challenged and even though there has been many studies and research on this subject, there is still no consensus or protocols on the effects and use of cold water therapy.

To make things even more interesting, in recent years, there have been developments in the field that make this type of alternative treatment even more intriguing.

Cold water therapy has been almost solely studied through the lens of performance and recovery up until Wim Hof, came to revolutionize the way people think about cold water and cold in general.

Known as “The Iceman”, Wim Hof is a Dutch man that holds over 21 Guinness World Records and the creator of the Wim Hof Method. What Mr. Hof has essentially done, is redefine the human relationship with cold, insisting that it has some unbelievable health benefits.

We know what you’re thinking. This does sound like someone who is just crazy enough to stand in the cold and draw the attention of the cameras.

The truth of the matter is that Wim Hof and his method did not escape the spotlight of mainstream media but that’s not where the story ends. His method managed to trigger the interest of the science world and literally, put it to the test.

In a 2014 research paper entitled “Voluntary activation of the sympathetic nervous system and attenuation of the innate immune response in humans” subjects tested the Wim Hof method for 10 days, indulging in various exercises involving meditation, breathing techniques and exposure to cold.

Whilst we could talk about the results of the research for days, we are going to focus on the main takeaways. For starters, researchers highlighted the following: “It appears that mainly the breathing techniques used by the trained individuals accounted for the increase in epinephrine and subsequent attenuation of the inflammatory response.”

What does that mean in plain english? There was decrease in inflammation for people that work out due to an increase in adrenaline.

The changes in breathing patterns and subsequently, Heart Rate Variability (HRV), are some of the most interesting takeaways from the research.

Here is the full list of benefits associated to cold water therapy:

At Club Health, we are always at the forefront of innovation and progress. We never settle and never go with the norm. Cold water therapy will be available at the Club very soon and we are excited to see you enjoying the benefits.

Let’s start with a few insights regarding sauna and its benefits.

Sauna benefits have been well-documented. In recent years, there has been a new iteration of sauna called infrared sauna. Before we introduce how it can help and why it’s beneficial, let’s define it.

What Is An Infrared Sauna?

Infrared saunas use electromagnetic radiation with wavelengths to produce heat within a confined space. Infrared light penetrates the skin and allows the temperature to rise, creating the desired result.

Unlike traditional saunas, infrared saunas heat the body from within rather than the air in the room. That allows for a deeper heater penetration than a traditional sauna, which leads to more sweat, and efficient detoxification.

As we have mentioned before, sauna benefits are well documented and there is a reason it has been part of healthy lifestyle routines for years. Infrared sauna has come to add to those benefits and make the sauna even more accessible.

The biggest knock against saunas has always been the insufferable high temperature. In order to achieve maximum results, there is a minimum amount of tie you need to spend in the sauna and this is not for everyone.

Heat tolerance is a big factor and this is exactly what infrared saunas are here to resolve. The infrared light can get the desired results at lower temperatures, opening the door to people that were previously discouraged by high temperatures.

The fact that infrared light can directly heat up the body instead of the air in the room, it has a more instant impact on blood circulation.

Better circulation is known to get your metabolism moving, or relieves muscle and joint pain, boosts the immune system, and reduces stress and fatigue.

Sweating can help your skin get rid of dirt, oil, and other particulate matter that is not visible to the naked eye. Infrared saunas also fall into the category of “low level light therapy,” which is used to treat acne, psoriasis, and eczema.

Breathing is not really a skill, is it? It’s one of those things everyone does, unconsciously without tracking it or paying attention to it, right? Yes and no.

Yes, breathing is an essential part of being and an action that happens without us realizing, without us trying. What if we told you, though, that breathing is a skill? That you can work on it and that there’s a lot you can gain from mastering it?

What most of us don’t realize, is that there is a strong relationship between respiration and postural stability. We all think of breathing on face value – the process of inhaling oxygen to power our being.

Breathing is so much more than that. Here’s some interesting facts.

Which brings us to the idea of controlled, deep breathing. Here are the benefits associated with controlled breathing techniques.

Finding natural, non-invasive methods of alternative treatments that don’t require manufactured medicine, is the ideal scenario for any ailment.

When it comes to high blood pressure, research has shown that controlling your breathing and engaging in slow breathing patterns increases “baroreflex sensitivity,” a mechanism associated with blood pressure regulation.

Whilst breathing alone can’t be the sole reason blood pressure decreases, the research findings showed that if practiced regularly, controlled breathing can lower blood pressure and heart rate. What that means is that you are immediately looking at a lower risk of stroke and cerebral aneurysm.

Controlled breathing also affects the immune system. Researchers at the Medical University of South Carolina found that the breathing exercise group’s saliva had significantly lower levels of three cytokines that are associated with inflammation and stress.

What further research has shown is that controlled breathing can:

Add all of these together and what you have is a toolbox of weapons to fight against diseases. Controlled breathing allows you to prepare your body against disease.

Breathing is a major vessel of detoxification, by exhaling carbon monoxide. When it comes to inhaling, deep slow abdominal breathing helps you increase the amount of oxygen that enters your lungs.

From the lungs the oxygen moves into your bloodstream where it binds to red blood cells and is transported to all the cells and tissue in your body. That process facilitates the movement of lymph through the bloodstream and dramatically increases the elimination of toxins.

Research has also shown that deep-breathing exercises are part of the treatment process for people affected by moderate to severe lymphedema.

According to a 2016 study the rhythm of our breathing is closely related to the electrical activity generated in the brain – a process that influences our ability to remember.

These results form the basis of controlled breathing exercises and alternative treatment. Club Health’s expert practitioners follow the latest scientific data, research and are able to put together personalized plans that will help you see results almost instantly.

While mushroom and nootropic benefits for the human body have been around for decades, it’s only in the past couple of years that they started becoming mainstream.

The use of these natural substances is not necessarily used to treat ailments but rather to enhance and boost the mental capacity of healthy people. These substances are known to improve mental performance and more specifically memory, focus, creativity, intelligence, and motivation.

For a more in depth analysis about the origins, history and use of mushrooms and nootropics, feel free to watch this excellent video by Dr. Ramon Velazquez, Ph.D.

Here is a more detailed breakdown of mushrooms and nootropics benefits:

People often mistake physiotherapy to just being the treatment of injuries, muscles and back aches. This is why Club Health came to existence. To change this perception and amplify the message that physiotherapy treats the cognitive and mental side of the human existence.

The body is an entire unit. Not just the legs, the arms or chest. It works in unison and introducing mushroom and nootropics supplementation will allow us to work on the body as a whole.

Our staff will be available at all times to guide you through each supplement’s purpose, ingredients and use in order to put your mind at ease about any objections or questions you might have.

Club Health’s reason for existence is to innovate, to push the boundaries of physiotherapy. We want to understand the body. We want to get into the details and find ways to treat it the best way possible.

These alternative treatments will slowly yet steadily become a staple of Club Health’s arsenal. We want to make your body the most beautiful place to live in. To give the opportunity to take full advantage of its capabilities.

All you have to do is walk through our doors (when COVID finally allows it 🙄) and talk to us about the alternative treatment you are interested in. Our staff will inform and guide you through everything you need to know.